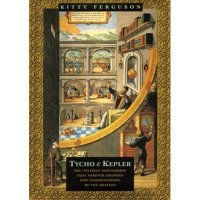 Description (From Publishers Weekly)
The story of how Copernicus replaced the prevailing geocentric view of the universe with his heliocentric model is a familiar one. Less familiar are Tycho Brahe’s contributions to astronomy and his influence on Johannes Kepler, who revolutionized 17th-century thinking about planetary movements. Science writer Ferguson’s intellectual and cultural biography of these two seminal scientists provides a delightful, detailed look into the ways that each man developed his ideas about the universe. Brahe, a Danish nobleman, developed a variety of instruments for observing the heavens. In his observatory off the coast of Denmark, he built a magnificent armillary-an instrument that allowed him to construct his theory that Venus and Mercury orbit the Sun while the Sun and the outer planets orbit the unmoving Earth. In 1600, Brahe took on a brilliant young student named Kepler, whom Brahe asked to carry on his own work after his death. Though indebted to Brahe for his instruments and his detailed charts of the stars, ultimately Kepler departed from Brahe’s views, confirming instead Copernicus’s theory that all the planets orbit the Sun. More famously, he discovered that the planets had elliptical rather than circular orbit. Ferguson (Measuring the Universe) paints her picture of Brahe and Kepler in broad strokes, placing them among the political intrigues of their times and the conflict between religion and science. Her biography offers glimpses of two men completely enamored of the beauty of the stars and planets and their attempts to describe the world through the eyes of this great love.

Genius
The Life and Science of Richard Feynman

Description (Publishers Weekly)
It would be hard to tell personal stories about the late Nobelist Feynman (1918-1988) better than the subject himself did in What Do You Care What Other People Think? To his credit, Gleick does not try. Rather, he depicts Feynman’s “curious character” in its real context: the science he helped develop during physics’ most revolutionary era. Fans of Feynman’s own bestseller, Surely You’re Joking, Mr. Feynman!, won’t be disappointed by his colleagues’ recollections of his reckless obsession with doing science (a grad-school dorm neighbor once opened Feynman’s door to find him rolling on the floor as he worked on a problem); but the anecdotes punctuate an expanded account of Feynman the visceral working scientist, not Feynman the iconoclast. This biography wants to measure both the particle and the wave of 20th-century genius–Feynman’s, Julian Schwinger’s, Murray Gell-Mann’s, and others’–in the quantum era. Gleick seems to have enjoyed the cooperation of Feynman’s family plus that of a good many of his colleagues from the Manhattan Project and the Challenger inquiry (in which Feynman played a scene-stealing role), and he steadily levies just enough of the burden of Feynman’s genius on the reader so that the physicist remains, in the end, a person and not an icon of science. A genius could not hope for better. Gleick is also the author of Chaos: The Making of A New Science.

Description (Amazon.com)
Few writers distinguish themselves by their ability to write about complicated, even obscure topics clearly and engagingly. James Gleick, a former science writer for the New York Times, resides in this exclusive category. In Chaos, he takes on the job of depicting the first years of the study of chaos–the seemingly random patterns that characterize many natural phenomena. This is not a purely technical book. Instead, it focuses as much on the scientists studying chaos as on the chaos itself. In the pages of Gleick’s book, the reader meets dozens of extraordinary and eccentric people. For instance, Mitchell Feigenbaum, who constructed and regulated his life by a 26-hour clock and watched his waking hours come in and out of phase with those of his coworkers at Los Alamos National Laboratory. As for chaos itself, Gleick does an outstanding job of explaining the thought processes and investigative techniques that researchers bring to bear on chaos problems. Rather than attempt to explain Julia sets, Lorenz attractors, and the Mandelbrot Set with gigantically complicated equations, Chaos relies on sketches, photographs, and Gleick’s wonderful descriptive prose.

Description (Amazon.com)
Isaac Newton was born in a stone farmhouse in 1642, fatherless and unwanted by his mother. When he died in London in 1727 he was so renowned he was given a state funeral—an unheard-of honor for a subject whose achievements were in the realm of the intellect. During the years he was an irascible presence at Trinity College, Cambridge, Newton imagined properties of nature and gave them names—mass, gravity, velocity—things our science now takes for granted. Inspired by Aristotle, spurred on by Galileo’s discoveries and the philosophy of Descartes, Newton grasped the intangible and dared to take its measure, a leap of the mind unparalleled in his generation. James Gleick, the author of Chaos and Genius, and one of the most acclaimed science writers of his own generation, brings the reader into Newton’s reclusive life and provides startlingly clear explanations of the concepts that changed forever our perception of bodies, rest, and motion—ideas so basic to the twenty-first century, it can truly be said: We are all Newtonians. 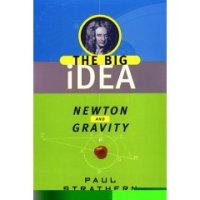 Newton and Gravity
The Big Idea

Description
A good case can be made for Isaac Newton being the finest mind humanity has yet produced. His theory of gravity offered his contemporaries their first glimpse of how the universe actually works, and his mathematics enabled later generations to walk on the moon. Today, we know that gravity keeps our feet on the ground, but how many of us know how Newton’s greatest discovery really works? In Newton & Gravity, Paul Strathern encapsulates several of Newton’s more mind-expanding discoveries, explaining in lively prose their cultural context as well as Newton’s early obsession with science (bordering on dementia) that made his revolutionary vision possible. Just a few of the big ideas covered here are: 1) Newton’s discovery of calculus at age twenty-three, 2) Why gravity, one of the greatest human insights of all time, was in fact a hunch and how it actually works, and 3) Why it took Newton twenty years after his discovery to reveal to the world the secret of gravity and planetary motion. Ideal for the intelligent reader eager to better understand how and why the universe works the way it does, Newton & Gravity is a fascinating refresher course that makes physics not only fun but shockingly easy to understand.

Einstein and Relativity
The Big Idea

Description (Amazon.com)
Paul Strathern has turned his attention from big philosophers to big ideas, specifically Einstein and Relativity. (Other titles in his Big Idea series include Hawking and Black Holes, Watson, Crick, & DNA, Curie and Radioactivity, and Newton and Gravity.) Like Strathern’s previous books, Einstein and Relativity makes for good company at a coffee shop or on the bus, with its slick cover and fluid prose. Not surprising for its size (just over 100 short pages), the book focuses more on the man than the science, recounting anecdotes that shaped Einstein’s personal and intellectual growth. Tales of him as a quirky, curious youngster flow naturally into his days of iced coffee and pipe smoking in Zurich and run-ins with professors. The bulk of the book, though, deals with Einstein’s annus mirabilis, 1905, when his three most influential papers were published, and the years of struggle, then criticism, then praise, that followed. If you’re looking for a good, readable primer on relativity, you’re better off with Brian Greene’s The Elegant Universe (and you’ll learn about superstrings and the GUT, to boot). But if you just want to get acquainted with Albert Einstein and gain some familiarity with his work, Einstein and Relativity does the trick, and fast. 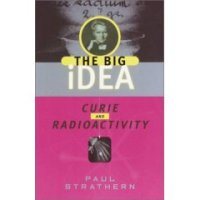 Curie and Radioactivity
The Big Idea

Description (Amazon.com)
Author Paul Strathern simply and emphatically describes Marie Curie–the pioneering scientist who coined the term “radioactivity”–as “the twentieth century’s most exceptional woman.” After reading this compact book’s 99 pages, you’ll likely be inclined to agree. In the Madame Curie installment of The Big Idea biography series (see also Einstein and Relativity, Hawking and Black Holes, and Crick, Watson, & DNA), we learn how a young Polish woman managed to bring up two daughters as a single mother while still earning two Nobel prizes and ushering in post-Newtonian science. Strathern humanizes this secular saint, recounting her romances, struggles, and scandals, admirably defeating the cold portrayal she received in the 1938 biography penned by her daughter Eve (a skewed description, Strathern says, that depicted Curie as “one of the most perfectly boring women imaginable”). As with Strathern’s other drive-by life stories, this lean little book is not exactly brimming with hard science, and the author’s familiar tone doesn’t always quite connect. Nonetheless, Curie and Radioactivity ably accomplishes what it sets out to: in less than an hour, you’ll find yourself on a first-name basis with one of the century’s most exceptional scientists–and women.

The Elegant Universe
Superstrings, Hidden Dimensions, and the Quest for the Ultimate Theory

Description (Amazon.com)
There is an ill-concealed skeleton in the closet of physics: “As they are currently formulated, general relativity and quantum mechanics cannot both be right.” Each is exceedingly accurate in its field: general relativity explains the behavior of the universe at large scales, while quantum mechanics describes the behavior of subatomic particles. Yet the theories collide horribly under extreme conditions such as black holes or times close to the big bang. Brian Greene, a specialist in quantum field theory, believes that the two pillars of physics can be reconciled in superstring theory, a theory of everything. Superstring theory has been called “a part of 21st-century physics that fell by chance into the 20th century.” In other words, it isn’t all worked out yet. Despite the uncertainties–“string theorists work to find approximate solutions to approximate equations”–Greene gives a tour of string theory solid enough to satisfy the scientifically literate. Though Ed Witten of the Institute for Advanced Study is in many ways the human hero of The Elegant Universe, it is not a human-side-of-physics story. Greene’s focus throughout is the science, and he gives the nonspecialist at least an illusion of understanding–or the sense of knowing what it is that you don’t know. And that is traditionally the first step on the road to knowledge.

Do you have a favorite physics book?
If so, please tell Dr. M about it through the comment feature below!