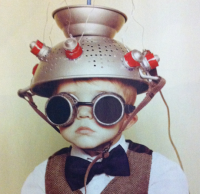 Dr. Merritt – the mad, evil science teacher who dares to believe his students can do real science.

Once upon a time…

There was a mad, evil middle school science teacher who held the crazy belief that his science students could actually (successfully!) do some of the things that real scientists do. One night, asleep in his evil layer, he had an evil dream. It was in this dream that weeLABs™ were born.

In short, weeLABs™ are a special scientific writing practice invented by the Drs. Merritt. weeLAB™ is a neologism that brings together no less than four concepts.

In summary, weeLABs™ are weekly scientific exercises in which Grade 7 students engage in elaboration, but also collaboration, to produce a formal written artifact.

Elaboration is a special term the Drs. Merritt use to summarize a suite (a collection) of important scientific practices. When working on their weeLABS™, and often in collaboration with their teacher(s) and peers, Grade 7 students engage in key scientific practices such as translation, explication, classification, description, observation, analysis, synthesis, logical reasoning, and written expression…just to name a few.

How many weeLABs™ will I be asked to do?

weeLABs™  are designed for Grade 7 students (Grade 6 students go to Flavour School!). Grade 7 students are asked to complete approximately 10 weeLABs™ per semester. Over the course of the entire school year, this means that students will complete 20 of them or so. With only the occasional exception, weeLABs™ typically begin on Mondays. The final written products are typically due at the beginning of class 7 days later–also a Monday. During the 2019-20 school year, weeLABs are planned for the following weeks:

What will I get from completing the weeLABs™?

What if I’ve already completed a weeLAB™ and I simply want to return to a certain page within the practice?

You can absolutely do that via the use of the links embedded in the outline below.

III. What is Elaboration?

To begin your weeLAB™ journey sequentially, proceed to THE OATH.